When I’m busy. I love that I can just call in to I Love My New Freedom. It’s a really…

With no family of my own left, your call helps me have contact with the outside world. God Bless You!

Your calls make me feel safe and cared about.

This article was posted on AARP.

Amid the global health crisis, the FBI and local police are investigating an uptick in grandparent scams. In New Jersey and New York alone, roughly 100 victims have lost about $1 million in recent months, an official says.

The scams often begin when an older person is contacted by a criminal who poses as a panicked grandchild in need of thousands of dollars quickly for an emergency such as a hospital bill or bail money, says the FBI’s Greg Takacs, an assistant special agent in charge in the bureau’s Newark, New Jersey office.

“It’s just so disgusting,” he says, as these bad actors are preying on older folks and exploiting the love and sense of altruism they have for their family members.

The scams are fast-moving extortions with various pretexts. A crook may pretend to be an attorney or bail bondsman, Takacs says. And the relative said to need big bucks is not always a “grandchild;” it could be a “niece” or “nephew.” 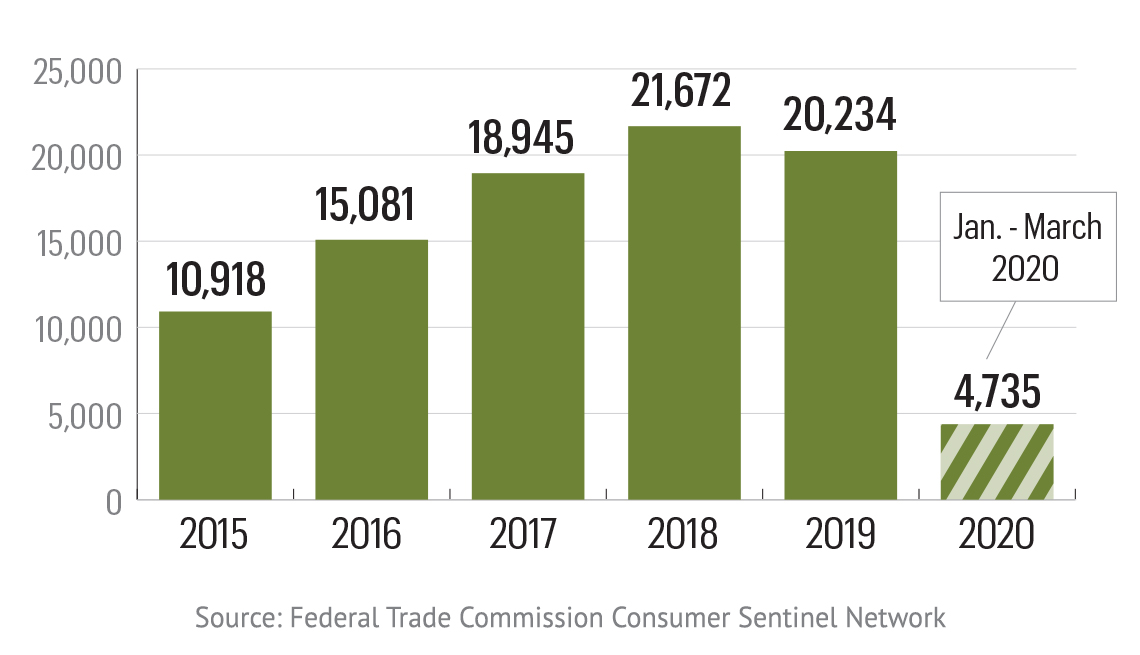 Here’s a look at the number of such cases reported to the Federal Trade Commission’s Consumer Sentinel Network. Cases totalled 91,585 from the beginning of 2015 through March 31 of this year.

Since 2015, some 91,585 people have been victims of impostor scammers who purport to be family members or friends, the Federal Trade Commission (FTC) says.

“In these days of coronavirus concerns, their lies can be particularly compelling,” FTC attorney Lisa Weintraub Schifferle warns. “They pull at your heartstrings so they can trick you into sending money before you realize it’s a scam,” she says. Resist the urge to act immediately, she adds, “no matter how dramatic the story is.”

Takacs, a lawyer with the FBI for more than 23 years, says his own mother-in-law was telephoned by a grandparent scammer before Memorial Day. The scammer masqueraded as the FBI official’s son, alleging he was in trouble in an out-of-state locale where the family vacations. The grandmother did not take the bait, instructing the “grandson” to call his parents.

That ruse bears out what Takacs says often happens before a target is contacted. Bad actors scour Facebook and other information sources online to figure out family relationships and concoct a phony story, he says.

Investigations have led to arrests and charges, and the FBI is pursuing leads in the U.S., Canada, the Dominican Republic and elsewhere, Takacs says. Among those recently arrested was Osvaldo Thomas, 41, a New Yorker from the South Bronx. He is facing criminal charges for an alleged crime spree across the Garden State and has been charged in Camden, Middlesex and Sussex counties.

In Blackwood, New Jersey, a victim was told a grandson was involved in a car crash and jailed. To amplify the urgency, the victim also was told the grandson may have COVID-19 and “may not receive proper care if he were in jail for several days,” Camden County court records show.

The victim withdrew $27,000 from a bank. A courier — allegedly Thomas — came to the victim’s residence to pick up the cash, records show.

The FBI calls the at-home pickup a “frightening escalation” of the scam, since in times past a victim might be instructed to wire funds to the bad guys. “Any time a criminal comes to your home, you are extremely vulnerable,” says Gregory Ehrie, who just retired as special agent in charge in the FBI’s Newark office. Sometimes crooks send a cab to pick up the money, or arrange for a cab to take the victim to a bank for a withdrawal and a courier to collect the money, Takacs says.

Thomas also was charged in a $18,800 grandparent scam in Middlesex County, where records said he and his white Toyota Prius have been linked to scams involving 11 older victims across the state.

How did the FBI track him down? Court documents detail surveillance-camera footage, a description of his Prius and a GPS tracker that investigators placed on the Prius on May 8, when State Police collared him on the New Jersey Turnpike at Secaucus.

Thomas also admitted to accepting $10,300 from a victim in Cherry Hill, New Jersey, and “delivering it to his co-conspirators for a portion of the proceeds,” court records show.

In Hunterdon County, New Jersey, police arrested a different New York man April 30 after his accomplice called a victim saying a grandson had been in a drunk-driving accident, officials said. The victim sent cash via the mail, but authorities intercepted it before delivery. After the scammer called again for more cash, police set up surveillance and arrested Mar F. Moran, from Yonkers, as he approached the victim’s residence for the money.

Moran has been charged with theft by deception and other offenses.

Cecilio Rodriguez-Rivas, 37, was sentenced last December in Atlanta to 13 months in federal prison after working for a telephone fraud operation based in his native Dominican Republic. The outfit ripped off grandparents across the U.S. Ten victims mailed him a total of $92,015 after his co-conspirators called them purporting they were a grandchild needing cash, court records show.

Often the victims were instructed to hide the currency in magazines and mail them to a house in Georgia’s Gwinnett County, where the defendant was staying. Rodriguez-Rivas wired the loot to accomplices in the Dominican Republic, getting $100 per transaction, records show.

The victims, now owed restitution, were men in Florida, Kansas, Louisiana, Minnesota, Nevada and New Mexico, and women in Arizona, Indiana, Texas and Wisconsin. The highest loss was $19,000; the lowest, $2,225. It took just six weeks to fleece all 10 victims.

He was sentenced after pleading guilty to conspiracy to commit wire fraud and to impersonating another man when applying for a passport. He was released May 28 from a correctional facility in Georgia for federal inmates, Bureau of Prisons records show.

At the FBI, Takacs says the Newark FBI office starting seeing an uptick late in 2019 and the frauds have spread statewide.

Amy Nofziger, who directs AARP’s Fraud Watch Network helpline (877-908-3360), likewise reports an increase in grandparent scam complaints as people isolate at home. Nofziger says the scams exact a financial and emotional toll on people; some have even lost their life savings.

“We’re all very emotional during these COVID-related times, and these criminals want to prey on your emotions,” she says. “And nothing is more emotional than thinking that someone you love is in trouble and needs your help.”

Even victims’ grandchildren — while blameless — may feel aftershocks of guilt and remorse, “so it’s really something that affects the whole family,” Nofziger says.

How to stop a grandparent scam

And if you get a scam call, report it to local police, to the FBI’s Internet Complaint Center and to the FTC .

Here’s advice from the FBI and other authorities on how to thwart a grandparent’s scam.

I’m Diana Beam, Founder of Keeping in Touch Solutions. It is my heartfelt desire for every person to live a happy and healthy life in the place they call home, no matter what their age. You can’t put a price on peace of mind for your parents and yourself. It’s priceless . . . and significant.

For that reason, the goal of every Keeping In Touch Solutions program is to provide a caring connection and service that both the elderly and their caregivers can rely on to make living that good life easier.

Does your aging parent need help? Check their eating habits.

When the Stress of Life and Caring for Dad is Too Much, Ask For Help

Sandwich Generation That Wears Many Hats

Please log in again. The login page will open in a new tab. After logging in you can close it and return to this page.