When I’m busy. I love that I can just call in to I Love My New Freedom. It’s a really…

With no family of my own left, your call helps me have contact with the outside world. God Bless You!

Your calls make me feel safe and cared about.

This article was posted on AARP.

But as COVID-19 spread across the country and the government recommended restricting discretionary travel, returning to Canada seemed out of the question.

“She certainly wasn’t expecting to stay for three and a half months,” says LeMond’s daughter Danielle Simone Brand, a writer and yoga instructor. But that’s exactly what happened.

During that time, LeMond played a critical support role in the family, entertaining the children for blocks of time each day so that Brand and her husband could work.

“I took so much work off their hands,” LeMond says. “I don’t know how they managed after I left.”

Across the country, multigenerational living situations — whether spurred by the coronavirus pandemic or already in place — are making grandparents starring figures in family life. They’re caring for grandchildren as parents work from home, helping with remote education, doing chores like cooking and yard work, and reading bedtime stories. The result is often a deeper relationship with members of the household.

“I got so much closer to my grandchildren and had so much fun,” LeMond says.

Older adults are benefitting from this multigenerational living environment, too. Research has shown that seniors who provide some care for their grandchildren had a 37 percent lower risk of death over a 20-year period, compared with those who didn’t or older adults who weren’t grandparents.

Ronan Factora, a geriatrician at the Cleveland Clinic in Ohio, says that older adults who moved in with family due to the pandemic might experience health benefits as a consequence. “You get a lot more socialization, and that social change reduces loneliness, which can lead to depression,” he says.

Factora adds that caring for children and sharing household responsibilities can improve well-being. “That sense of purpose — that is really a necessary part of living.”

Jennifer Shelton, a 75-year-old former school principal and academic consultant, says she experienced all of the above when she found herself extending a visit and unexpectedly living with her daughter and two grandsons in Ohio for two and a half months at the start of the pandemic. 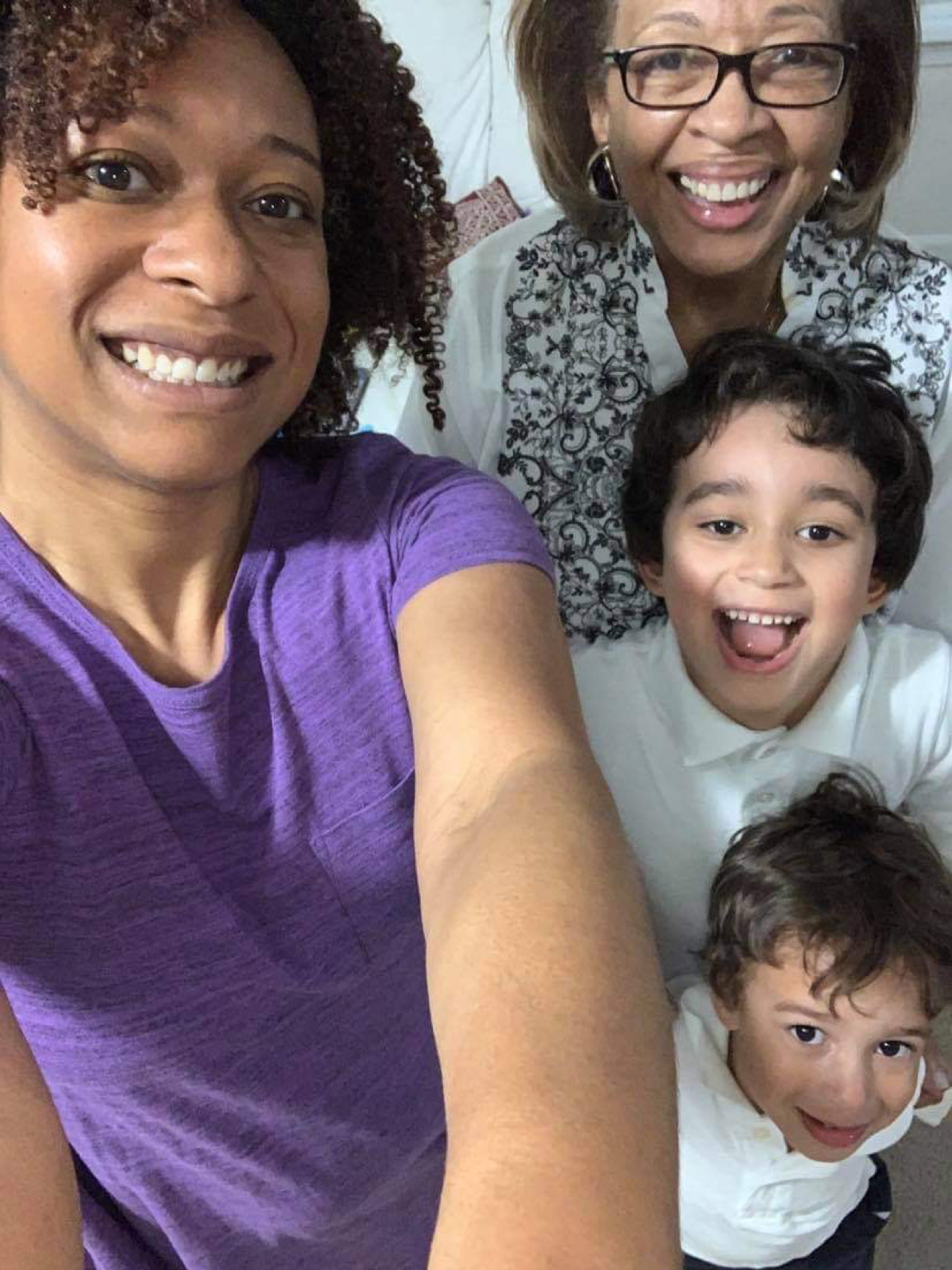 Jennifer Shelton and her daughter Shannon Melton Miller, along with her grandsons, found more bonding time during group living.

“I began to enjoy the time that I normally would not get with my grandchildren and my daughter,” Shelton says. “I hate that a dreaded pandemic was the cause of it, but it brought us together.”

Shelton wasn’t the only one who reaped the benefits of co-living. Her daughter, Shannon Melton Miller, a freelance journalist and single parent, says her mother was instrumental in supporting her children’s education as they attended school remotely.

Shelton is “pretty tech savvy for someone who’s 75,” Miller says. “I’d have to show her how to download Zoom or how to log in, but then once she was on, she was fine.”

And Shelton helped free up Miller to meet her work demands, something she says she might not have been able to do otherwise as a single parent.

“The boys got more Grandma time, and that was really critical when I had to work,” Miller says. Meanwhile, mother and daughter both had another adult to talk to rather than riding out the stay-at-home orders alone. “It was really a win for everybody.”

For some families, cohabiting is a return to tradition. In 1900, 57 percent of adults 65 and older lived in multigenerational households, according to the Pew Research Center. That number dipped in the United States following World War II and reached its lowest point in 1980, at just 12 percent.

Since then, the figure has steadily increased.

For people like 68-year-old Raj Makhijani, communal family living feels familiar. Before moving to the United States in 1974, Makhijani grew up living with generations of family members in Pune, India — something that taught him “to care for others and be empathetic to their needs.”

Today he’s passing those values to his 8-year-old granddaughter who lives with him and his wife, along with their daughter, in Princeton, New Jersey.

The family moved in together before the pandemic, but Makhijani says social distancing pushed them to become even closer. The bonus time with his granddaughter has been especially therapeutic.

“We play board games, share family stories, make art — things we often didn’t have time to do pre-pandemic,” he says. “I am more physically active, and I’ve never laughed so much in my life.”

I’m Diana Beam, Founder of Keeping in Touch Solutions. It is my heartfelt desire for every person to live a happy and healthy life in the place they call home, no matter what their age. You can’t put a price on peace of mind for your parents and yourself. It’s priceless . . . and significant.

For that reason, the goal of every Keeping In Touch Solutions program is to provide a caring connection and service that both the elderly and their caregivers can rely on to make living that good life easier.

Does your aging parent need help? Check their eating habits.

When the Stress of Life and Caring for Dad is Too Much, Ask For Help

Sandwich Generation That Wears Many Hats

Please log in again. The login page will open in a new tab. After logging in you can close it and return to this page.